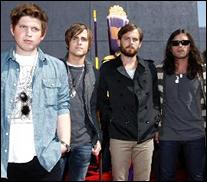 The concert at the Verizon Amphitheater in St. Louis, MO lasted only three songs before the Kings surrendered to the powers above, an infestation of pigeons.

"Jared was hit several times during the first two songs. On the third song, when he was hit in the cheek and some of it landed near his mouth, they couldn't deal [with it] any longer," said publicist Andy Mendelsohn in a statement to fans.

Drummer Nathan tweeted: "So sorry St Louis. We had to bail, pigeons s***ing in Jared's mouth and it was too unsanitary to continue. FULL REFUNDS 4 ALL. SO SORRY. Don't take it out on Jared, it's the f****** venue's fault. You may enjoy being s*** on but we don't. Sorry for all who (travelled) many miles."

Opening acts The Postelles and The Stills had also come off stage after their sets were covered in excrement according to BBC News.

The Kings of Leon are currently promoting their fourth album, Only By The Night, and will continue their tour in Cleveland, Ohio on Monday evening following the incident at at Verizon Wireless Amphitheatre.

The band promised fans that they would return to St. Louis. – by CelebrityAccess Staff Writers