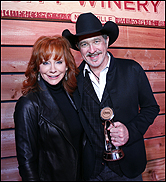 On hand to honor Brooks was fellow CMA Board member and artist Chris Young, as well as representatives from the numerous charitable partners Brooks has worked with over the years including the CMA Foundation, Louisiana Tech, Monroe Harding Children’s Home, Operation Finally Home, the USO, and Vanderbilt Children’s Hospital.

“Thanks to his contributions in the creation of the CMA Foundation and in the birth of CMA Instrumental Healthcare, as well as to the efforts he has volunteered to the other great causes represented here tonight, Kix’s philanthropic endeavors will be as highly regarded as his many musical contributions,” said Sarah Trahern, CMA Chief Executive Officer. “CMA is honored to be able to present our first ever CMA Foundation Humanitarian Award to Kix Brooks.”

Brooks has been an active member of the CMA Board of Directors since 1998. During this 17-year period, Brooks contributed to the growth of the organization and was instrumental in creating and developing several initiatives that have touched the lives of countless members of the music community including the CMA Songwriters Series, which just celebrated its 10th anniversary, and the creation of an affordable medical insurance program for CMA members known as CMA Instrumental Healthcare.

Can you imagine what it feels like to be me tonight?” Brooks asked the crowd as he accepted the Award. "But ultimately it’s not about me; it’s about every person in this room who is putting their heart into something meaningful and something significant in their community." – Staff Writers