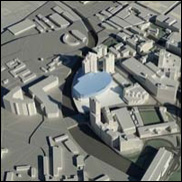 LEEDS, UK (CelebrityAccess MediaWire) — City officials signed off on the outline proposal for a new 13,500 capacity arena to be built in Leeds city center.

Although some members of the city's planning council expressed concerns about infrastructure improvements needed to accommodate the facility, roads, pedestrian access and parking, the council unanimously approved the plans, the BBC reported.

"There has been an unmet demand for arena facilities in Leeds over the past decade or two. Why should we have to go to Sheffield to get to Leeds?" said Committee chairman Martin Hamilton "Jobs for Leeds people will be created during the construction and running of the arena. Its promximity to the city centre and nearby bars, restaurants and other facilities make it an important stepping stone for stimulating the local economy as we come out of recession."

SMG Europe has already been selected to manage the £80m arena, which is on track to open in 2012. – CelebrityAccess Staff Writers