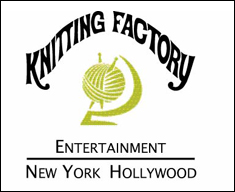 Each "Live From The Knitting Factory on XMU" performance will capture the spontaneity and eclectic energy of Knitting Factory concerts, while spotlighting emerging artists across multiple genres. Art Brut, Beauty Pill, Chin Up Chin Up, Georgie James and Portastatic, among others, will be featured during the first season of the series.

The British duo, The Boy Least Likely To, will kick off the new series March 2 during its regular timeslot, Fridays at 10 p.m. ET on XMU (XM 43). The upcoming broadcast schedule for "Live From The Knitting Factory on XMU" also includes: March 9 – Art Brut; March 16 – Mazarin; March 23 – The Broken West; and March 30 – Portastatic.

To coincide with the launch of "Live From The Knitting Factory on XMU," music fans will have access to XMU throughout March on the AOL Radio Network featuring XM. To access XMU or any of the 20 XM channels offered free through AOL's leading web radio service, visit http://www.aolradio.com/ (click on XMU channel 43 beginning March 1). — Bob Grossweiner and Jane Cohen