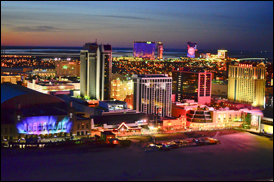 ATLANTIC CITY (CelebrityAccess) — Live Nation has re-enlisted to produce beach concerts or other major events for Atlantic City for the next 3 years.

According to the Associated Press, the Casino Reinvestment Development Authority on Tuesday approved the extension of the agreement signed last year with Live Nation that will see the promoter produce 6 major concerts each season for the next three years.

The deal is worth a reported $6 million. The company also landed a $3 million contract to run events at Boardwalk Hall.