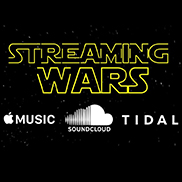 (Hypebot) – As the streaming wars rage on and different artists experiment with windowing and limiting their music to one provider or the other, it is the fan who typically ends up coming out on the bottom. Here we look at an alternative which would allows listeners to condense these multiple services into a single option.


We’ve all heard by now about Jay-Z pulling several of his albums from some music services and directing his fans to Tidal, the music service he bought not long ago. His motivation seems obvious, and both he as an artist, and Tidal, may benefit in the end. But he’s not the first artist to restrict digital access in various ways, for various reasons. This may be good for artists, and it may be good for some music services, but it’s a terrible experience for music fans.


In many ways, it’s like we’re back in the early days of digital music fighting over codecs. Music fans can’t go to a single streaming service and get access to every artist’s material – particular artists may be on this or that service, podcasts might be on SoundCloud, and videos from YouTube. That leaves them the option of creating multiple accounts with multiple apps on their devices. Then they have to remember which services have which songs, and they can’t create playlists with all their favorite tracks across those services. And forget about sharing music with friends that may have different music service subscriptions. C’mon, how is this a good experience for the listener?


The answer for the music fan in this restricted library world is the universal media player: a single app that aggregates all these disparate services and the artists available on them. With a single search, music lovers can find and listen to music across all of their services in an initiated experience. They can create multi-service playlists and never have to think, “Now, where is that track?” or, “What service does my best friend subscribe to?”


This is what Qus was created to do. Within a single app, it aggregates your Spotify, Deezer, YouTube, and SoundCloud accounts and music files on your iOS and Android devices. Tidal will be added shortly, and other services like Apple Music and Rhapsody will follow. The music is delivered natively from the original service, so it’s a win for the service as well. They get the play in their system and the continued incentive for the customer to maintain their subscription.


The industry has descended on Austin this week and is talking about how we can get people to listen (and pay for) more music. Driving fans from one service to another is not the answer; bringing all the services under one umbrella for a fluid music experience is. Then artists can use the platforms they prefer, the services can do what they do best, but most important, the music fan has a simple way to access all the music they want. Let’s think “fan first,” shall we?


Kurt is a lifelong music fan and experienced technology executive. He co-founded budtobud with Patrick Rousseau in 2009 and launched its current Qus system, the universal media platform, in 2015. He previously served as CEO of One Llama Labs, an acoustic machine learning company and pioneer in music recognition and recommendation. As the CEO of Nomadix, a public access networking provider, he led them to a successful exit. Kurt has also held executive leadership positions at public companies including Proxim, a pioneer in wireless networking, and managed a product division of Ascend before it was acquired by Lucent.