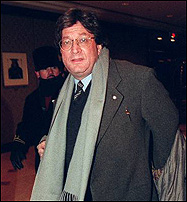 Judge Marrero made the ruling in granting summary judgment against Drabinsky and Gottlieb to plaintiffs in a class action lawsuit.

The plaintiff class is comprised of investors who purchased notes included in a $125 million 1997 offering by Livent. Subsequent to the offering, Livent restated much of the key financial information that was disseminated to the investing public at the time of the offering.

Drabinsky and Gottlieb both repeatedly invoked the Fifth Amendment and refused to answer when Pomerantz attorneys questioned them under oath as part of the case.

Numerous other defendants in the case, including CIBC Oppenheimer Securities Corp, an underwriter of the notes offering, auditor Deloitte & Touche, and Livent outside directors including A. Alfred Taubman, have previously entered into settlements with the plaintiffs.

The New York Post reported that Marrero said investors were stiffed out of $40 million. He said Drabinsky and Gottlieb must personally pay $23 million. The noteholders may have to ask a Canadian court to enforce Marrero's judgment.

"We are absolutely planning on seeking enforcement of the judgment," said investor Diane King. She declined to say if that involved getting a Canadian order.

Marrero noted the defendants are fugitives hiding out in Canada.

But lawyers for the plaintiffs vowed to track them down in Canadian courts to collect the payments.

Russel Jacobson, a lawyer with Pomerantz-Haudek, which represented the investors, said the defendants were slime balls.

"They refused to answer our questions at their depositions in Canada," Jacobson said.