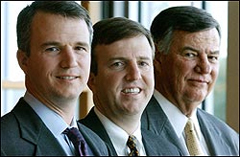 LOS ANGELES (CelebrityAccess MediaWire) –Michael Cohl's ascent to the position of Chairman of the Board isn't the only thing that's changing with Live Nation's board of directors.

While Cohl's bump was heradled with the usual press releases, less publicized changes included Randall Mays stepping down from the post of Chairman, a position he had held since Live Nation spun free from Clear Channel in 2005. SEC filings by the promoter also revealed that Randall's brother Mark Mays has left the board entirely, along with director Andrew Sullivan, who had served on the audit committee.

Randall will stay on with Live Nation however, serving in the role of Vice President of the board and L. Lowry Mays, Clear Channel founder and Mays family patriarch still retains his position on the board as well.

Also revealed in the SEC filings was the fact that Madonna is now eligible to sell the 1.17 million shares of Live Nation stock that she received in the agreement. This doesn't mean that Madge is selling, just that she is now legally eligible to sell her holding. She may want to consider it with the trajectory Live Nation's stock has been following in recent months. Since she sealed the deal with them in mid-October of 07, the value of her shares have declined by about $12,261,000. – CelebrityAccess Staff Writers