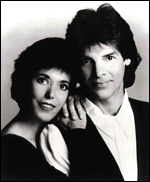 SANDEFJORD, Norway (CelebrityAccess MediaWire) — Lorene Yarnell, a dancer and one-half of the 70s comedy team Shields and Yarnell, died at her home after suffering a brain aneurysm. She was 66.

Shields was best known for her work with Robert Shields on the CBS variety show "Shields and Yarnell", which saw broadcast from 1977 and 1978. Yarnell had formal training as a dancer and with her then-husband Shields, melded mummery, comedy and dance into a new style of performance art.

According to the New York Times, Shields and Yarnell launched a musical revue, "Broadway Follies" at the Nederlander Theater in New York. The show was not a hit however and closed after just one performance.

Yarnell also appeared in the Mel Brooks film "Spaceballs" as the robot Dot Matrix (with voice work by Joan Rivers.)

According to the Los Angeles times, Yarnell divorced Shields in the mid-1980s and her survivors include her fourth husband, Bjorn Jansson, and brother, Richard. – CelebrityAccess Staff Writers