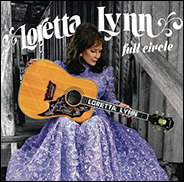 While a press statement released by Lynn's team noted that the surgery was minor, she has been advised to stay off the road until fully recovered and has consequently postponed a series of dates.

Lynn, 83, was touring in support of Full Circle, released on Interscope on March 4th. Full Circle was Lynn's first studio album since 2004's Van Lear Rose and peaked at #4 on the country charts. – Staff Writers