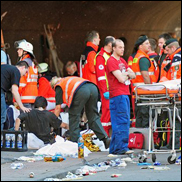 BERLIN (VIP-News) – Over 2,200 witnesses may have been questioned by the police, but the question of responsibility a year after the Love Parade tragedy in Germany's Duisburg (North Rhine-Westphalia) on July 24th 2010 in which 21 died and over 500 were injured is still unanswered.

Duisburg's chief public prosecutor, Rolf Haferkamp said in a statement that, "the investigation will still take months and it is still unclear if those in charge acted carelessly." Haferkamp reported that the prosecutor office is investigating 11 employees of the city of Duisburg, four employees of Lopavent (the Love Parade's concert-promoter) and a police officer. Haferkamp also said there are indications that the city of Duisburg may not have checked the security plan properly.

Duisburg's Mayor Adolf Sauerland, who was harshly criticized after last year's tragedy, and organizer Rainer Schaller are not among those being investigated. Nevertheless, many in Duisburg are demanding Sauerland's resignation as they feel he should take moral responsibility for what transpired.

On Sunday's year anniversary (July 24), a memorial service was held in the Duisburg soccer-stadium for the deceased and injured. "It was a tragedy that definitely could have been avoided," said Nadia Zanacchi, from Italy and the mother of one of the victims. "The concert should never have taken place at such a place." 7,000 attended the event.

At the ceremony's end, the chart-topping Der Graf from the German band Unheilig, sang their hit "Geboren um zu Leben," the unofficial hymn of the Love Parade victims.

Following the ceremony, church bells Duisburg rang out and the bereaved were allowed to commemorate their relatives at the place where the tragedy occurred: The tunnel passageway that led in and out of the festival. The site was blocked off for an hour and half for the observance. The tragedy at last year's Love Parade, Germany's largest annual music festival, was due in large part to this one egress.

It is estimated that as many as 1.4 million people attended last year's festival, which was held in a disused 230,000 square-meter freight railway station. According to police and witness reports, panic initially broke out in the overcrowded tunnel which resulted in audience members collapsing and being trampled by fans pushing forward.

Organizer Rainer Schaller also chose Sunday to announce the end of Love Parade. Schaller is owner of McFit fitness chain and was the managing director of Lopavent in Berlin.

In March of this year, a report on Billbaord.biz entitled "Love Parade Follow-Up: Why Little Has Changed in German Concert Industry," interviewed promoters and event organizers in Germany who by and large felt the German concert industry is sufficiently regulated.