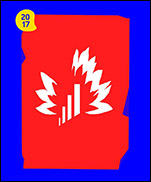 (VIP-NEWS) — Following one reported rape and several sexual assaults at this year`s Bråvalla music festival, there will be no festival in 2018, the organisers FKP Scorpio said on Saturday.

One of Sweden`s largest music festivals, Bråvalla has been arranged outside the eastern Swedish town Norrköping every summer for the past five years, and this Saturday, July 1st, is the final day of the 2017 edition.

But the popular festival will not return in 2018 due to concerns over several cases of sexual assault, the organizing company FKP Scorpio said in a press release on Saturday.

One person was reportedly raped during a Håkan Hellström concert. One case of sexual coercion has been reported, as well as several cases of sexual assault.

"Words cannot describe how incredibly sad we are about this, and we most seriously regret and condemn this. This is not f-ing okay. We do not accept this at our festival," a festival representative wrote.

The organizers did not say if or when the festival will return. Nor would they say whether the company`s financial situation had anything to do with the cancellation – FKP Scorpio reported a loss of 75 million kronor ($8,904,500) in 2016.

"We don`t have any further comments on that. We have issued a press release, and that`s what applies here," FKP press spokesperson Johanna Jonasson told Swedish broadcaster SVT.