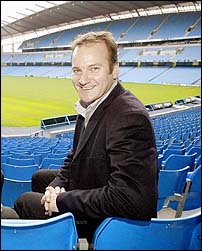 MANCHESTER, UK (CelebrityAccess News Service) – The City Of Manchester Stadium is undoubtedly one of the best Stadia in the Country and following its success as a sporting venue it is about to welcome a new style of entertainment to it’s wonderful Stadium. From next summer onwards, Britain’s newest Stadium will be opening its gates to a host of major concerts. As part of a partnership project involving Manchester City Council and Manchester City FC, the Stadium played host to the Commonwealth Games in 2000, and is now the home of Manchester City FC. Within the next year, it also hopes to be one of the best outdoor concert venues in the country.

The Manchester based SJM Concerts have been appointed a five-year contract to secure concerts in the Stadium. Director Rob Ballantine said “This is tremendous news and will have a major impact on the music industry right across the North of England. The City of Manchester Stadium will have a concert capacity of around 55,000 to 60,000 people, which is most welcome in the North. As the stadium is brand new the facilities for the audience are superb. There is plenty of legroom at each seat and the bars, toilets and car parking put this venue well and truly in the 21st Century. As you would expect there are also wonderful hospitality facilities and a very modern backstage area including an indoor football pitch! We will look for possibly just one concert next summer and if all goes well increase the numbers in the ensuing years. I am hugely excited at the possibilities for the future and look forward to working closely with both Manchester City FC and the City Council. We will be inviting all the major promoters to come and visit the facilities to see for themselves what a tremendous option this offers the live circuit.”

Head of Sponsorship at the Stadium, Steve Sayer, commented: "We are delighted to have entered into this agreement with SJM Concerts. The City of Manchester Stadium has a great deal to offer as a venue for both football and music and we have every confidence that the additional visitors which this venture will bring in will be as impressed with the stadium as our own football fans continue to be."

Hosting concerts at the football-based venue is an idea that had been planned for the City of Manchester stadium since its inception. It’s aim has always been to become a community facility for Manchester and joining forces with SJM Concerts means that what was once a concept on a piece of paper, can actually become a reality – an initiative that will benefit a great deal of concert-goers in the North-West.

Councillor Richard Leese, Leader of Manchester City Council, said:" The City of Manchester stadium is playing a vital role in bringing investment and jobs to Manchester. The wide range of events and sport is putting East Manchester on the map and bringing benefits to local families.”

"We'll ensure that all concerts are carefully managed and that they bring maximum investment with as little disruption to local people as possible. "

Seemingly Mr. Ballantine is offering stadium tours every fortnight to coincide with Manchester City’s home games! True dedication to the cause! Just don’t bring any riggers who may ask questions such as “how many points do you have?” –by CelebrityAccess Staff Writers