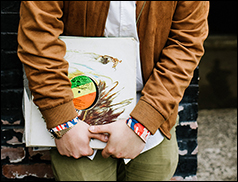 (Hypebot) – At the ripe age of 25, Matt FX shares how he found his way from performing as a soprano at age ten into the career of music supervisor, working on shows like Skins and Comedy Central's Broad City,

At just 25, the New York producer, DJ and music supervisor Matt FX has a jaw-dropping resume.

He was touring the world as a professional soprano at age 10—he even sang at the Sistine Chapel. At LaGuardia High School, Matt became friends with a certain Azealia Banks who showed him some tunes. Electronic music then became his thing and he started DJing with Tribes New York crew.

Fast forward to 2011. Matt is 18 and he’s the supervising the music for Skins—the American version of the infamous Brit TV show. Next thing you know, he’s the music supervisor for Comedy Central’s most successful show: Broad City.

Matt FX is also a rising music producer—one to keep your eye on. Under the name Scooter Island, he’s collaborated with vocalists and MCs including Junglepussy, Synead, Taro and Salomon Faye.

On the occasion of his solo debut as Matt FX (listen below), we spoke to him about music supervision, collaboration and his creative process.

You describe falling into music supervision by accident. What lead to it?

I started music supervising after a chance meeting with Bryan Elsley, the creator of the show Skins. At the time, a friend who I’d shown the original British Skins had an opportunity to intern for Bryan, and she brought me in to help with a script-revising focus group. I asked about the opportunity to send Bryan some music, and the rest is history.

I dig like anyone else—SoundCloud, blogs, social networks, etc. More than anything, I rely on my personal network of friends and colleagues around the world to share what they’re into!

In terms of the differences between digging for a DJ set and a TV show, I find that with DJing I’m generally digging for stuff that is either a.) purely house/techno or b.) a track or remix of a track that is something everyone knows. Whereas with supervision, I’m looking for stuff that pretty much no one has ever heard, and it’s certainly not limited by whether or not there’s a beat!

Who are some artists that you helped launch by putting their music in a show?

This is a strange question to answer forthright, but I suppose I was pretttttttty early with Phantogram, Blood Orange, and AlunaGeorge, back when I was working on Skins. With Broad City, I don’t know if there’s been enough time yet to really know who will hit it big—but I urge you to check out the Broad City soundtrack for tracks from some incredible independent artists!

What has music supervision taught you?

I think if music supervision has taught me anything, it is to believe in the universe—you never know where or when you’re going to find something that will change everything.

Your project Scooter Island is based on a cool collaborative model, a revolving cast of vocalists and MCs. How do you select your collaborators and make that work?

Ha—in figuring out the answer to this question, I realized a funny little paradox in the fact that I really like working with artists who are very confident in their uniqueness, in what makes them them and what makes their sound so special. That said, I like nothing more than pushing artists out of their comfort zones and making them try things that are totally foreign to them. It’s funny!

I’m curious about the tools you use to work. What’s your studio or setup like?

My personal setup is incredibly light —I use Ableton on my laptop, and have a tiny little MIDI keyboard I can shove into my backpack—the Akai MPK Mini MkII. That said, there are a couple studios I work out of in New York and LA that all of my various gear—synths, percussion, guitars, etc.—has been spread out. I used to have a studio back in the day, though the space was sadly destroyed by Hurricane Sandy.

When it comes to production, how does your creative process unfold?

I try to vary up my process and do something a little different every time. In general I only sample things that people I know have made (at this point, mainly to avoid potential legal issues). In terms of synthesis, I use a lot of built-in ableton products as well as Native Instruments stuff. Kontakt is an amazing plugin they make—there are so many resources online for interesting weird little instruments that people create and upload for free!

I’m also a huge fan of manipulating loops, especially transforming them from the way they sound a la carte to something totally different—either by chopping it up, changing the speed drastically, etc. Whatever gets the brain flowing!

If a young aspiring musician told you “I want to be a music supervisor!” what would your advice to them be?

HANG OUT WITH FILM AND TV PEOPLE! Find someone you believe in and help them make their indie movie dreams a reality. Move to a big city and look if you can get a job assisting in licensing at a studio, agency, or independent firm. Never stop asking questions.

We were thrilled to read your Twitter review of LANDR. Can you tell us how you did that test and what your conclusions are?

I uploaded both masters to a private SoundCloud playlist and named one (A) and one (B) and sent the link to a bunch of artists who I hold to incredibly high regard.

To be honest, with many of these artists, this was the first time they were hearing the tune—as I think the idea of me wanting their engineering opinion was perhaps an easier way of getting them to check something out!

My conclusion was simple. LANDR has seriously raised the bar as to what’s expected from a master in 2017. I wound up sending the LANDR master to the engineer and basically telling him he’d need to beat that master if we were going to move forwards with him.

It also definitely convinced all those guys I had check out the song that LANDR is an absolutely amazing tool to have at your disposal! We wound up having to do a clean version master for Beats 1 radio a few days later and just went with the LANDR master—the difference is literally less than 1%!