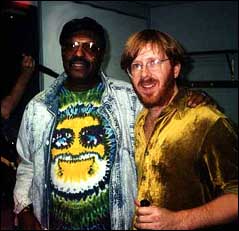 Veteran San Franciscan musician and recording artist Merl Saunders has been diagnosed with cancer and forced to cancel his touring schedule through June while he receives treatment. With a career that began as Johnny Mathis' first band leader to his work with Jerry Garcia and The Grateful Dead as well as his own extensive recording and constant touring, Merl Saunders, 68, may be best known for his 1992 release "Blues From The Rainforest."

He is scheduled to undergo surgery in early April for a malignant tumor found in the back of his sinus cavity followed by several weeks of radiation. "I had a very similar condition several years ago and underwent treatment, which almost no one was even aware of," says Saunders, "but this time I am forced to cancel so many gigs that I didn't want to hide the reason from my fans."

"I don't want anyone to worry. My old pal Muhammad Ali taught me that when you get thrown a punch the best thing you can do is keep fighting," continues Saunders. "I've been through this before and nothing keeps me from the stage. In fact, I'm going to use this time to finish a recording project that I'm excited about. I'm also going to go into the vault and listen to some of those old recordings with some of my old friends like Jerry Garcia to share with the fans."