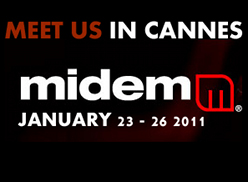 CANNES, France (VIP NEWS) — The 45th Midem benefited from a 30% rise in participants from the digital and technical sector but suffered an overall 4.9% drop in attendance from last year.

Crolot stated that the drop in participants at the event was simply a reflection on the market place, and promised that the conference would continue for many years to come and that the event would evolve as the industry continues to change.

He added that Midem had launched a new conference, Rethink Music, which is set to take place in Boston, USA between April 25-May 7 later this year.