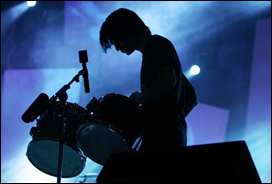 LONDON (VIP NEWS) — The 12 nominees for the 2008 award were confirmed at a small ceremony held at Covent Garden in London yesterday morning.

Radiohead and frontman Robert Plant were the biggest names on the list – the Oxford band were nominated for 'In Rainbows', while Plant picked up the nod for his collaboration with Alison Krauss, 'Raising Sand'.

Alex Turner made it three Mercury nominations on the trot as his The Last Shadow Puppets collaboration with The Rascals' Miles Kane followed the first two Arctic Monkeys albums in 2006 and 2007 to win a place on the 2008 shortlist.

As widely anticipated anonymous dubstep producer Burial was nominated for 'Untrue', while Elbow, Estelle and Adele were also among the 12.

Some of this year's biggest selling British albums were notable by their absence, with no place for either Duffy or Coldplay on the shortlist, as the panel gave nods to the likes of Laura Marling, Neon Neon and British Sea Power.

Rachel Unthank And The Winterset bagged the folk spot with 'The Bairns', while jazz act Portico Quartet were nominated for 'Knee-Deep In The North Sea', according to NME.com