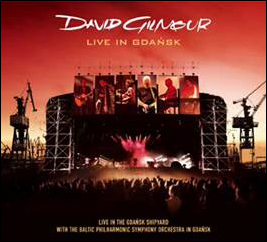 LONDON (CelebrityAccess MediaWire) — 'David Gilmour Live In Gdansk' is a double live album plus concert DVD being released on September 16, 2008 on Columbia Records. 'David Gilmour Live In Gdansk', the first solo live album from Pink Floyd's singer/guitarist, captures the magic of his concert held in front of 50,000 in the Gdansk shipyards, the final performance of his critically acclaimed 2006 'On An Island tour'. It also features the first ever recording of selected Pink Floyd classics performed with an orchestra.

"This was the first time I have played in Poland and it was a thrill to be there helping to mark one of the most important anniversaries in recent European history. The Gdansk shipyard is a deeply symbolic place and it was an honour to perform our music there. It was particularly exciting to have my friend Zbigniew Preisner there conducting the Baltic Philharmonic Symphony Orchestra and to be able to perform my album for the first time as it was intended"

Former President of Poland Lech Walesa and Mayor of Gdansk Pawel Adamowicz invited David Gilmour and his band to perform this very special concert to mark the 26th Anniversary of the founding of Trade Union Solidarity. The concert, funded by the City of Gdansk and Solidarity, was titled "It Started in Gdansk – The Space Of Freedom" and was held on August 26, 2006, a National holiday for the Polish people commemorating the founding in 1980 of The Solidarity Trade Union. Nine years later The Solidarity Trade Union toppled the Communist Government, with its leader Lech Walesa elected President of a democratic Poland.

The double live album 'David Gilmour Live In Gdansk', produced by David Gilmour and Phil Manzanera, features the Gdansk concert and demonstrates a musician and his band playing at the very peak of their musical brilliance.

The six piece band is accompanied for the only time on the 'On An Island tour' by an orchestra: the 40-strong string section of the Baltic Philharmonic Symphony Orchestra conducted by Zbigniew Preisner, orchestral arranger on David Gilmour's critically acclaimed solo album, "On An Island".

It is the first ever live recording with an orchestra of Pink Floyd's 'High Hopes' and 'A Great Day For Freedom', the latter performed here as a one-off for this special Solidarity anniversary.

Playing with Gilmour at this historic concert was his band of world renowned
musicians:

The two and a half hour DVD which accompanies the live album is directed by Gavin Elder. The DVD evocatively portrays the drama of the Gdansk concert, set against the urban landscape of the shipyard and crane-filled skyline.

Hung above the stage, suspended on two giant cranes, were six, 16 ton screens, each one focused on a band member and lit in a kaleidoscope of color and lasers by lightmeister Marc Brickman.


As well as 113 minutes of concert footage, The DVD includes a riveting 36-minute documentary which includes Gilmour's private meeting with former President Lech Walesa, chats with the band and crew, concert rehearsals and a moving wreath-laying with Walesa at the Memorial to the shipyard workers killed in the 1970 uprising.

'David Gilmour Live In Gdansk' is available in several formats, all of which include all the orchestral tracks; the 113-minute 'Concert DVD'
includes footage of all the orchestral songs, plus 'Echoes' and 'Astronomy Domine'. 'Wot's Uh. The Deal?' is included only on the vinyl LP set.