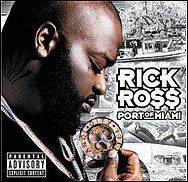 MIAMI (CelebrityAccess MediaWire) — Flying in the face of mounting evidence to the contrary, rapper Rick Ross steadfastly maintains that he's been the victim of an Internet smear campaign designed to make him appear as if he once (gasp) had a regular job.

According to website The Smoking Gun, documents have surfaced that indicate Ross, AKA William Leonard Roberts worked for two years as a corrections officer in the state of Florida. Documentary evidence includes payroll records that show terms of employment of an individual that shares not only Ross's real name but also his social security number.

Additional material such as a photo that shows someone who looks decidedly like Ross shaking hands at a Department of Corrections graduation ceremony with Marta Villacorta, who at that time headed the South Florida Reception Center. Villacorta, now the department's South Florida regional director.

Ross, who's two rap albums have focused largely on songs drawn from Ross's alleged experiences in the Miami cocaine business, claims that the photos were doctored in photoshop by his detractors. According to Ross, he "Came out of nowhere and took over the streets" so perhaps all of this evidence to the contrary is mere coincidence. – CelebrityAccess Staff Writers