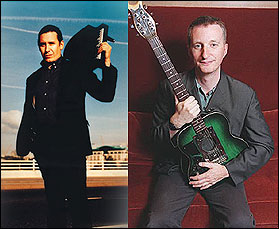 Musicians have made a silent protest outside the Houses of Parliament against proposals they say could criminalise carol singers. Around 500 wore gags in a demonstration against the government's licencing bill, which they claim will silence live entertainment in Britain's pubs and clubs.

Billy Bragg and Jools Holland joined demonstrators to lobby MPs against the proposals. The bill will require venues in England and Wales to obtain licences from their local council for any form of entertainment, with a maximum punishment for performing without permission of £20,000 or six months in jail.

Protesters claim it will hit small acoustic bands, folk singers and even carol singers and nativity plays in church halls and could kill off traditions like Morris dancing.

But culture minister Kim Howells insisted their concerns were unfounded, saying: "Musicians have nothing to fear from this bill, but much more to gain from it". "Claims that activities like carol singing on someone's door step, rehearsing in a rehearsal studio or trying out an instrument in a music shop will be licensable are untrue."

The Musicians' Union's Hamish Birchall, a jazz drummer, said: "This Bill is proposing to criminalise virtually all public performances of live music unless it is licensed.

"The process of getting a licence is not going to be simple and a lot of pubs and bars that currently put on music will simply not want to be bothered with it any more.

"A lot of people who make a living doing small solo or duo gigs will be seriously affected.

The proposals have prompted some members to call for its 80-year-old ties with the Labour Party to be severed, while more than 40,000 people have signed an online petition.

If passed, the plans would also allow pub, club or bar owners to open for up to 24-hours a day, seven days a week.

The bill has gone through the House of Commons and is now in the Lords.