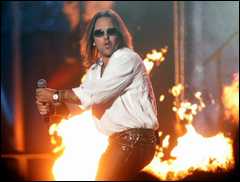 Despite an erroneous wire service report that he has broken his leg, Motley Crue's lead singer Vince Neil partially tore the medial portion of his calf muscle five songs into Crue's performance at the Phillips Arena in Atlanta, GA on Sept. 17.

Neil's leg gave out shortly before intermission, and the band was forced to end the concert early after Neil was taken to a nearby hospital. Although he was in a great deal of pain at the time, Neil is expected to make a full and quick recovery, according to his doctors, who nevertheless urged him to take some time off. The band intends to return to Atlanta to make-up the show. Tickets from the show will be honored at that time. Ticket holders should contact their point of purchase for more information or refunds.

"I just felt something snap in my leg, like a cramp," recalls Neil. "I just couldn't go on."

Nevertheless, Neil is planning to return to the stage on Sept. 18 in Memphis, TN, at the Desota Arena, despite doctor's orders. No shows will be canceled. "I'm a trooper," said Neil.

"He will be able to perform, but can't really jump around until it heals," said bandmate Nikki Sixx. "Luckily, we have a few days off here and there for him to recover."