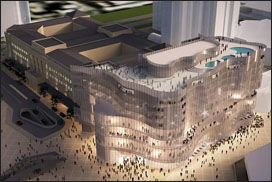 ADELAIDE, Australia (CelebrityAccess MediaWire) — New Zealand-based casino operator SkyCity said that it has reached a deal with the South Australian Government that will help to pave the way for a $350 million expansion of the Adelaide Casino.

The first phase of the development, expected to start in the next few months, includes a $40 million refurbishment and other changes to the current facilities in the Adelaide Railway Station building.

In return for the license concession from the government, SkyCity has pledged to utilize technology to identify and help problem gamblers and for the casino to provide up to $300,000 for gambling rehabilitation programs. SkyCity has also agreed to increased tax revenues and predicts that their tax bill will double to more than $40 million by 2020, the Herald-Sun reported.

"The signing of these key agreements is an important milestone and paves the way for SkyCity to proceed with its $350 million investment to transform Adelaide Casino into a world-class integrated entertainment and tourism complex," SkyCity CEO Nigel Morrison said.

"Our world-class complex will be an integral part of the new entertainment, sporting and arts precinct being developed on the banks of the River Torrens, complementing the redeveloped Adelaide Oval and the new and expanded Adelaide Convention Centre." – Staff Writers