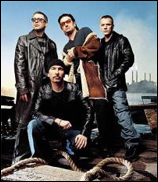 Coppel believes the company earned millions of dollars from the corporate packages, but none of the suppliers were paid, and Coppel had to step in to ensure they, and the band, received their money, according to New Zealand’s Sunday Star Times.

Wilson is also involved in another hospitality company, Capital Events, that also owes more than $700,000 for tickets and services related to the games with the New Zealand Rugby Union.

Wilson, a former tax manager with Ernst and Young, was in business with another former Ernst and Young employee, millionaire Andrew Tauber. As the former co-owner of Corporate Host and Capital Events, Wilson was involved in transferring money and offloading the companies to a South Auckland publican, Peter Morgan.

Morgan was a discharged bankrupt at the time and was again declared bankrupt last December.

In October last year, a month before the concerts, all shares of Capital Events Holdings were transferred to Morgan, who paid $1 for them. Wilson claimed that Tauber had previously supported the business, and it was sold to Morgan so that Wilson could exit the company.

When asked by lawyers for Michael Coppel Presents if money was transferred because it was evident that the company would fail, Wilson denied any knowledge of that.

Wilson claimed that was not directly involved in the U2 packages, and did not know how much was supposed to be returned to Coppel. The hearing was adjourned so attempts could be made to obtain further accounts, business records and bank statements of the companies involved, which Wilson said were held by Tauber’s offices. –by CelebrityAccess Staff Writers