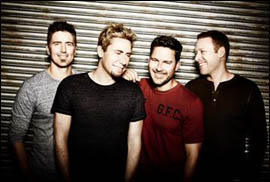 The Live Nation-produed "Feed The Machine Tour" begins on June 23 in Noblesville, Indiana, with 44 dates across North America including stops in Detroit, Los Angeles, Chicago, Toronto, Vancouver, and more.

Daughtry will support the tour on all U.S. dates, as well as the Toronto and Montreal shows. Shaman's Harvest will also be on hand to support for all dates. For Nickelback's dates in Western Canada, Cheap Trick will be on the bill as well.

Nickelback is currently in the studio putting the finishing touches on their ninth album, Feed The Machine, which will be released on June 9th by the band's new label BMG.

The "Feed the Machine" tour will be the band's first major outing since 2015 when they were forced to cancel the lion's share of their North American tour after lead vocalist Chad Kroeger was diagnosed with an operable cyst on his larynx.