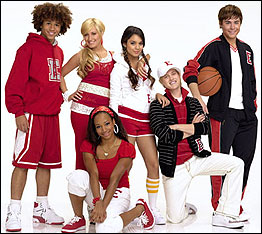 The LA Times put together a nice Forbes-esque review of musicians who made the most money in 2007, and the results are frightening. Not just because record sales were off 15% last year, or the concert industry fell about 10%, but because of the artists on their list, and more importantly, those artists & respective ages.

Now, you could make the case that for marketing purposes, Rascal Flatts (all members over 32) and Dave Matthews (41) could all be included in the above group…

because a large percentage of their ticket and record buying market falls in the under 30 age group. But by the same token, the average age of somebody buying a Hannah Montana ticket or High School Musical CD is probably well over 30 (gifts*), and the target market for both Josh Groban (Oprah watching housewives, to horribly generalize) and Carrie Underwood (American Idol fans, as well as country fans, who aren't as age-focused as pop music buyers) undoubtedly swings older than 30 on average. So four of twenty is being "accurate" for my purposes (target market assessment), and six is being generous. That makes the following statement important and very scary:

Only about one fourth (four, maybe five, possibly six out of twenty) of the most lucrative artists in the music industry last year were under 30, or were marketed primarily to buyers under 30.

Why is this scary? Everyone keeps saying "thank God The Police put their differences aside last year" or "lets hope Led Zeppelin does a full on world tour next year." Sure, this is great for now, but it ignores the 800 pound gorilla in the room: these guys aren't recording anything new, and eventually, the Zeppelins, the Van Halens, the Billy Joels and Paul McCartneys and Mick Jaggers of the world will not be able to tour any more. Or their fans will be too old to climb the steps in the arena. Or big box retailers will stop carrying CDs altoghther, and these older acts targets audiences will stop buying their music instead of venturing online. Or all of the above. And when this happens, music is in serious trouble.

The long tail is largely to blame here. When these old bands came up, they were the entertainment. Their concert was the thing going on in any given city that night, their appearance on a late show was the thing to watch that night (think The Beatles on Ed Sullivan). Now, there is just too much going on at any given time to get that sort of attention. From Wikipedia: