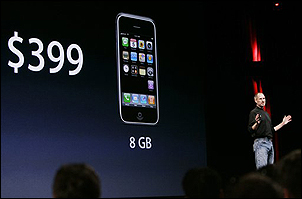 Where's the one from the RIAA? For suing all those traders, many of whom are poor students, as millions go untouched and P2P increases in volume?

And while they're at it, why don't the labels apologize for high CD prices. Ripping off not only the public, but the artists, who took reduced royalties in order for the companies to gain a foothold with a cash cow.

And how about the lack of singles, forcing us to buy the complete album for the one good track we wanted? And now bitching that iTunes has the ability to deliver just that, albeit at an inflated price, and ripping off the act once again.

We're all in it together.

Wait, that's not true. Has Lyor Cohen invited you to play golf at his club? Clive Davis for dinner? Ever try to approach Jimmy Iovine? Good luck getting through the handlers.

Just like the rest of America, we've got two classes in the music world. The rulers and the proletariat. And that's how the royalty likes it. We pick 'em, you buy 'em, and everybody's happy!

But what if everybody's NOT happy?

Too many iPhone buyers weren't happy that Apple dropped the price two hundred bucks in two months. Sure, it's technology, where you always get more for less if you wait. But TWO MONTHS?

What keeps a company in business? Its loyal CUSTOMERS! Who are the loyal customers defending the major labels? The companies have forgotten they're consumer businesses, that without the public, they're fucked. This ain't hedge funds, with guaranteed fees from investors who can afford to lose. This is down in the gutter, er, the aisles of Best Buy, business, where every dollar counts.

What have the labels done to appease their customer base? I'm trying to think of something. Maybe releasing the album you just bought with one or two new tracks for Christmas so you've got to buy the whole thing all over again. God, there's an endless parade of ways the major labels have fucked their customers. No WONDER no one's on their side!

How about a mea culpa. An admission that they fucked up Net music. An announcement that DRM is history. And you can get a lot of tracks for a little. How about bringing us in instead of keeping us OUT!

The label's best friend is not the retailer, not the press, but the fan. You've got to create fans. Who'll spread the word, who will continue to buy your wares. But even when the labels get a reasonable act, they whore them out, they eviscerate all their credibility in a dire dash for cash. Long term thinking? The major labels would sue you for divorce on the altar!

And admitting they're wrong?

Kind of like George Bush. Checked HIS ratings recently? If he were a TV show, he'd be canceled. If he were a radio format, he'd be FLIPPED!

Not that Steve Jobs is all warm and fuzzy. But he's in search of excellence, and with this one little missive acknowledges he cares about his customers, he realizes that without taking care of Apple's early adopters, there WILL BE NO early adopters!

You need these guinea pigs to make a go of it. Like with a record. The first 50,000 are the hardest. You've got to get traction. It's these high risk takers who will spread the word, keep you in business.

And while we're taking lessons from Steve, if the labels are so worried about piracy, why don't they announce new albums THE DAY THEY'RE RELEASED! That's what Apple does. Steve introduces it and you can go to the Apple Store or its online equivalent and get the product IMMEDIATELY! Interscope was worried about theft of Fitty before release date? Why didn't they wait to announce a new album UNTIL Tuesday?

Yup, the record business is one of hype. Smoke and mirrors. All in service to a good first SoundScan week. It would be like introducing the iPhone and only expecting to SELL IT for sixty days.

There was money for Apple in sixty days. But the REAL money is if it can get the whole world on board. Momentum begets more sales. Kind of like the iPod. It took a YEAR AND A HALF for it to break big! If the act you sign doesn't break big in that time frame your A&R ass is FIRED!

We often wonder if Mr. Jobs is human. But in one fell swoop, with one personal e-mail, yup, it reads like it was written by him, we believe he's on our team. There's no one at the major labels who's on our team.