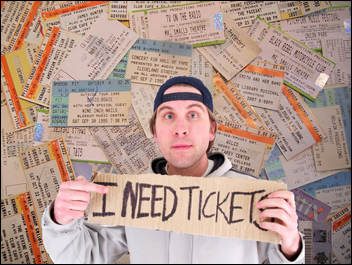 Expect those checks to decrease.

Don’t know if you’ve been following the movie business, but the studios have taken back compensation. Rather than give eight digit salaries and profit participation from dollar one, they’re making almost everybody, actors and directors, wait for their money (if it comes in at all!) The same thing is going to happen in music.

The game changed when Robert Sillerman rolled up the promoters into what’s now called Live Nation. Seth Hurwitz has been screaming about overcompensation for years. But to no avail. But now Live Nation sees no way out. Despite Rapino’s protestations that the future is just around the corner, the financials continue to be horrible. So, expect Rapino to put the big hurt on acts next year.

Sure, AEG will overpay. But they’re not eager to do this anymore either. Especially in light of the Michael Jackson fiasco. Furthermore, AEG isn’t in the business of developing new talent, just scraping the cream off the top.

Live Nation can’t continue to overpay and survive. So, they won’t.

Sure, Rapino tried to institute new, fair, creative deals a couple of years back, but it’s a different era now. The customer’s wallet is closed. These shenanigans can’t go on forever.

Expect lower guarantees and a return to revenue sharing deals.

Acts will have no choice. The public has spoken. People don’t want to overpay for what they’ve seen before.

Everybody in this business is going to have to take less. And a healthy, profitable Live Nation is good for the business.

As for a Ticketmaster merger… The worst offender re Live Nation guarantees is Howard Kaufman of Frontline. How will Irving Azoff handle this thorny issue if the merger goes through? Is his loyalty to the acts or to Live Nation Entertainment?

I expect Irving to finesse this question. To make sure the acts make enough money to be happy. But that’s the problem with consolidation, the conflicts of interest.

Behind the music: The real reason why the major labels love Spotify


No wonder the majors speak so highly of Spotify – they receive 18% of shares in the online streaming service. It’s just a pity that artists won’t get to see any of this.

Ironically, this is what Irving Azoff wants to change. He wants to put the acts in power. He wants to change the game from a plantation/slave paradigm to one resembling today’s movie business, where talent can sell itself to the highest bidder on a project by project basis.

The unfettered superstars, like the Eagles and Radiohead, have already done this. But those under contract to the Big Four not only get little dough, they’re told what to do.

The labels got their shares in Spotify for almost nothing. If the company is profitable or sold they get all the revenue and the artists get nothing. ENOUGH with this paradigm! Labels sue online companies, artists get bupkes…HOGWASH!

The labels’ greed is insuring their death. 360 deals are actually hurting the majors. Worried about their bottom line, their land grab is alienating anybody with pure talent. Who will go to Irving or someone new, not beholden to the system, and own all his own rights and make all his own money.

Terry McBride is a brilliant thinker, but his innovations mean nothing without hit acts.

You can’t jump into the future, you must straddle the past, present and future all at one time.

This is a business of talent. You’ve either got to be the act or have the rights to a hit act. Otherwise, what you’ve got to say is hot air.

My Mama told me to NEVER sell my songs.

Granted, Sheryl hasn’t had that many hits, but isn’t it short-sighted to sell now? Unless she’s got a big investment she wants to make, with the market at its lowest point ever.

I’m not privy to her annual statements. These are deals based on math.

But I will tell you one thing. Those songs pay off year after year. That money you get in a payout? Where you gonna put it? GM stock? It can evaporate. Whereas songs will be performed for eons, will continue to pay out and STILL be worth something years later.

And only ten million?


INNOVATIVE MARKETING, BUT WHAT ABOUT THE MUSIC?


It’s easier to come up with a great marketing idea than a hit song.

Just like it’s easier to promote the endorsement deal you made with an athlete as opposed to BEING that athlete!

The Internet has provided innovative thinkers the ability to hype their wares in innovative ways. But being able to come up with a cool idea to sell your music does not make the MUSIC good!

Very few people have the ability to make music many people want to hear. Never forget this.

Just like most of the public knows nothing about health care reform, most people have no idea how the cell phone business works.

Read this article and be OUTRAGED!


Can we at least stop paying for incoming calls, like Europe?