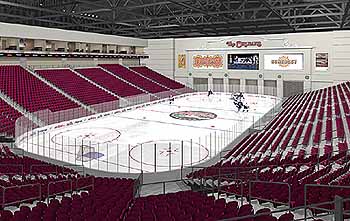 Construction of Las Vegas' newest arena is underway, making it one of four arenas
within a four-mile radius – MGM Grand Garden, Thomas & Mack Center and
Mandalay Bay Events Center, in addition to the 7,000-seat Aladdin Theatre and the
3,000-seat Cox Pavilion.

According to Coast Resorts Chairman Michael Gaughan, owner of the property, the cost of the new facility jumped to nearly $43 million from $20 million due to a series of upgrades. Among its amenities will be granite floors, the country's highest restroom-to-guest ratio of any facility, a private concourse level with 24 suites and 220 club seats and an audio/video system with two
LED video screens and an LED wraparound video system. It will also have the largest upholstered arena seats in the area – 21 inches wide.