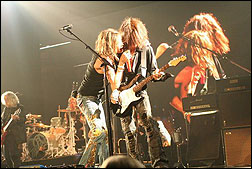 CHARLOTTETOWN, P.E.I. (CelebrityAccess MediaWire) — The Prince Edward Island government is looking to invest up to $150,000 to bring rock legends Aerosmith to the Canadian province this summer, according to the CBC.


Tourism Minister Philip Brown wouldn’t confirm the exact amount the government is going to spend, but the province contributed about $70,000 last summer to bring the Black Eyed Peas to the Island. Brown told the news service that the show pumped between $2 million and $3 million into the local economy.

An Aerosmith show could bring twice that amount, Brown said, so the government’s contribution may also double.

“It would be a whole lot less risk [to the organizers] for this event to take place in Halifax or Moncton or Montreal or Calgary, so the people that are going to benefit, which includes the taxpayers of P.E.I., have to be prepared to share some of the risk,” Brown told the CBC.


The concert is expected to take place in the infield at the Charlottetown Driving Park Entertainment Centre in late July.

Last week, the Charlottetown city council voted to pay for police and fire services for a major concert this summer, although no band or price tag was confirmed.

Concert promoter David Carver, who brought the Black Eyes Peas to the city last year, told the CBC that he was a few steps away from following that up with Aerosmith this year, saying “Aerosmith is without a doubt one of the top three concert-selling and album-selling bands ever.” –by CelebrityAccess Staff Writers