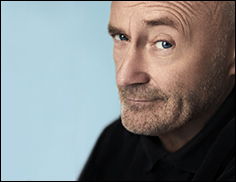 LONDON (CelebrityAccess) — British rocker and former Genesis frontman Phil Collins postponed a handful of concerts after he was hospitalized for injuries suffered in a fall.

In a post to Collins' social media, a rep for the artist explained the circumstances of the fall.

"Phil suffers from ‘drop foot’ as a result of a back operation which makes it difficult to walk. He rose in the middle of the night to go to the toilet and slipped in his hotel room, hitting his head in the fall on a chair. He was taken to hospital where he had stitches for a severe gash on his head close to his eye and is recovering well. He will be kept under observation for 24 hours."

While Collins' spokesperson did not clarify 'drop foot' we can guess that they meant the malady 'foot drop' which is a paralysis of the nerves or muscles of the lower leg that make it difficult to walk.

Affected shows include two dates at Royal Albert Hall (June 8 & 9). The dates have already been rescheduled and will now take place on November 26th and 27th. Collins is due to return to the road on Sunday in Cologne and then Paris before returning to London for his headline performance at BST Hyde Park on June 30th. – Staff Writers