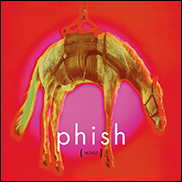 NEW YORK (CelebrityAccess) – In May, Phish will release Hoist, the band's fifth full-length studio album, as a limited, individually numbered, 180g 2-LP audiophile black vinyl set in stores. An orange splatter colored version will be available exclusively on Record Store Day, April 16th. The band also has a run of tour dates scheduled for this summer.

Hoist was recorded on 24-track 2" reels in October-November 1993 at American Recording Co. in Calabasas, California. Three singles were released from Hoist – "Down With Disease", "Sample In A Jar" and "Julius" and all three remain in common rotation at Phish shows. Live tracks from an April 21, 1993 Columbus, Ohio rendition of "Split Open And Melt" were blended with studio tracks including parts of "Yerushalayim Shel Zahav" and effects to create the experimental D Side, "Demand."


The album was recorded and mixed by Ed Thacker and produced by Paul Fox, who incorporated a variety of guests throughout the album including the Tower of Power Horns, additional vocals by Alison Krauss and strings by The Richard Greene Fourteen, backing vocals by the Rickey Grundy chorale and Rose Stone & Jean McLain, banjo by Béla Fleck, violin by Morgan Fichter, and even some trombone by Jonathan Frakes – who played Commander Riker on Star Trek: The Next Generation.