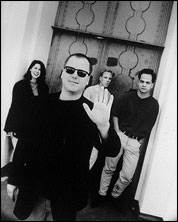 (CelebrityAccess MediaWire) —
On September 20, Rhino Home Video will release Pixies Sell Out, an
all live in concert DVD culled from seven different Pixies reunion concerts
held in 2004. The main part of the program is from the band's concert in
Belfort, France o (July 3) and features 27 classic Pixies songs including
Here Comes Your Man, Monkey Gone to Heaven, Bone Machine, Where Is My
Mind, and Gigantic. The DVD's bonus material offers additional
performances from concerts in the United States (Coachella/May 1,
Lowell/December 1, Austin City Limits Festival/September 18, and New
Orleans' Voodoo Festival/October 16), Japan (Fuji Rock Festival/July 30),
England (the Move Festival/July 10) and Scotland (T In The Park/July 11).
Pixies Sell Out will retail for $19.99.

Pixies–Frank Black/vocals, guitar; Joey Santiago/guitar; Kim Deal/bass;
and David Lovering/drums–kicked off their reunion tour on April 13, 2004,
at the Fine Line Music Café in Minneapolis, MN, and over the ensuing eight
months shattered sales records around the world. The following May 1, Pixies
co-headlined the Coachella Valley Festival in the hot
desert for 50,000 fans

. Pixies went on to sell out a record-setting four consecutive nights
at Chicago's Aragon Ballroom, 19,000 tickets for their four-night London run
were gone in less than two hours, and the band capped off 2004 with an
unprecedented eight-night stand at New York's Hammerstein Ballroom.

The Pixies formed in Boston in 1986 when Charles Thompson dropped out of
college and convinced his friend and roommate, Joey Santiago, to do the
same. The two recruited bassist Kim Deal, who suggested drummer David
Lovering join the group, and the lineup was official. Thompson adopted the
stage name Black Francis and the group named themselves the Pixies after
flipping through a dictionary. The Pixies quickly gained a cult following
as well as critical acclaim for their signature blend of screaming punk
noise, indie guitar rock, classic pop, and surf-rock riffs mixed with
impossible-to-ignore melodic hooks and Francis' bizarre lyrics about
religion, UFOs, and metaphysics.

During their six years together, the Pixies released five albums on the 4AD
label – Come on Pilgrim (1987); Surfer Rosa (1988); Doolittle (1989);
Bossanova (1990), and Trompe Le Monde (1991). Experiencing particular
success in the U.K. and Europe, the Pixies played sold-out festivals and
received a multitude of fan, peer and critical acclaim, the U.K.'s NME named
Doolittle the "Second Best Album Ever." The band's influence was
far-reaching; U2's Bono referred to the Pixies as "one of America's greatest
bands ever;" David Bowie called their work "Just about the most compelling
music of the entire '80s," and Kurt Cobain, who identified Surfer Rosa as
his favorite album of that entire decade, confessed, when writing Smells
Like Teen Spirit, that, "Basically, I was ripping off the Pixies."