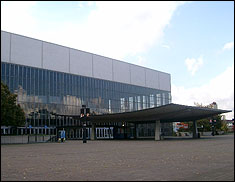 PORTLAND, OR (CelebrityAccess MediaWire) — The City of Portland is weighing its options on the future of the old Memorial Coliseum which may be torn down to make way for a new baseball stadium for the minor league Portland Beavers. The Beavers currently call PGE Park home, but would move to make way for the major league soccer team, The Portland Timbers.

Currently managed by Global Spectrum, the 48-year-old Memorial Coliseum first opened in 1960, and has served as a home to a number of sports franchises, including the NBA's Portland Trailblazers. The administrative office of the Trailblazers are still located at the Coliseum, but would move downtown to the new downtown entertainment district, The Rose Quarter, which the city is once again considering.

"There have been many plans for the Rose Quarter over the years and very little action," Portland Mayor Sam Adams said during a press conference "After 30 years of waiting, now is the time for action."

Also with the mayor at the press conference were reps from developer Cordish, who are known developing major entertainment districts in other cities, the Blazers and the Portland Development Commission.

The development under consideration would most likely include a blend of retail and restaurants and residential along with a hotel and a major new live performance space. AEG has been named to manage the district.

"More concepts are being produced," Adams said. "This is a work in progress. We will run the cost estimates and get a realistic understanding of how doable the scenarios are and what are the pros and cons of the concepts."

The plan doesn't have universal support however and the Journal of Commerce has reported that a group of architects are pushing to have Memorial Coliseum placed on the National Register of Historic Places despite it failing to meet the eligibility requirement of being 50 years old. – CelebrityAccess Staff Writers