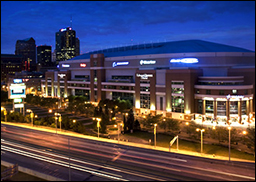 St. LOUIS, Mo. (CelebrityAccess) — The departure of the St. Louis Rams for Los Angeles may mean a new name for the The Edward Jones Dome, the stadium the team currently calls home.

According to the St. Louis Business Journal, the departure of the team may allow financial services firm Edward Jones to terminate their naming rights agreement for the stadium. Edward Jones signed a ten-year naming rights agreement at te stadium, in 2002, worth about $3 million per year and then renewed the deal in 2012 with an 11-year extension worth $32.7 million.

A spokesman for Edward Jones told the St. Louis Business Journal that the company would consider it's options carefully before moving forward.

Jeff Davis, CEO of IT consulting firm Perficient, which also has a sponsorship deal with the Rams, said that his company would likely not renew when the term for the agreement expires next month.

“As the Rams official community partner, Perficient and its employees committed significant financial resources and investments of time in jointly participating in several civic endeavors in recent years,” Davis told the St. Louis Business Journal. “We’re disappointed the organization has now chosen to abandon that same community, and in particular, the way the process unfolded with the organization failing to make genuine and good-faith efforts to remain in St. Louis. We believe (St. Louis) is an important NFL market and we’d look forward to sponsoring another team in the future if the opportunity were to arise.” – Staff Writers