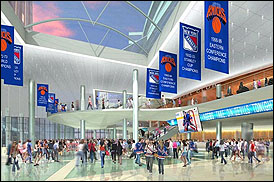 NEW YORK (CelebrityAccess MediaWire) — As Madison Square Garden starts a major $850 million refurb, a real estate developer who controls much of the property in the area is quietly advocating that the historic venue be moved.

Vornado Realty Trust chairman Steven Roth has reportedly been in talks with both Madison Square Garden prexy Hank Ratner and James Dolan, who's family controls the arena, as well as city hall officials about the idea, the New York Times reported.

Sources familiar with Roths' proposal told the New York Times that it would see Madison Square Garden moved one block over to a new arena that would be built within the walls of the James A. Farley Post Office, which sits across Eighth Avenue from the Garden. The current site would be torn down and replaced by a huge retail mall as well as improvements to the transportation lines which lie underneath.

Roth, the developer behind a 2008 $14 billion dollar proposal to refurb and expand Penn Station and create a special zoning district that would allow Vornado to build numerous skyscrapers in the area. The deal fell apart under the weight of the dire economic climate.

Roth's plan aside, officials at Madison Square Garden maintain that they are moving ahead as planned with the renovations, which will see the venue temporarily close at the end of June.

“The process to transform M.S.G. is well under way, and any other option that may or may not be available is not being considered, period,” Garden spokesman Barry Watkins told the Times. “This transformation is the best option for our customers, partners and all of New York.” – CelebrityAccess Staff Writers