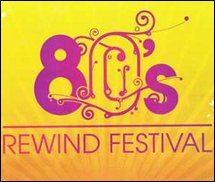 LONDON (CelebrityAccess MediaWire) — Rewind -The 80s Music Festival is to launch a new weekend event at Scone Palace in Perthshire, Scotland in July 2011.

Originally launched at Henley-on-Thames in 2009, the 80s Rewind Music Festival was successful in attracting 30,000 people, and was nominated for Best New Festival of 2009.

In its second year at Henley-On-Thames (2010), the festival grew to capacity at 40,000 people and was broadcast for the first time on Sky Arts television.

Organizers have announced that a Scottish version of the festival will be launched next year at the historic setting of Scone Palace in Perthshire – the home of The Earls of Mansfield and the crowning palace of the Kings of Scotland.

The festival will take place on the weekend of the July 29th -31st and will feature a sizable line-up of 80s artists as well as festival activities from Silent Discos to Live Karaoke bars along with Camping and Glamping (Glamorous Camping) options.

Tickets will be released and the full official line-up will be announced in January.