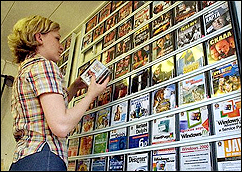 The illegal copying and trafficking of pirated music has become increasingly sophisticated in the past year, according to new data and analysis released by the Recording Industry Association of America (RIAA) in its annual record of "commercial piracy" (non-Internet) statistics and enforcement efforts.

"The practice and trade of music piracy have become more sophisticated, cunning and connected to organized crime," said Brad Buckles, executive vice president of Anti-Piracy. "Working with law enforcement officials across the country, we continue to develop and implement multifaceted strategies to respond to these emerging threats to artists, songwriters, record labels and others in the music community."

The RIAA reported a 58 percent increase in seizures of counterfeit CDs, the authentic CD look-alikes with high-quality artwork and packaging that make the product appear legitimate. Working together, local law enforcement agencies and RIAA investigators seized 1.2 million counterfeit discs in 2004. This pirate product is increasingly traced back to smaller CD copying plants. The growing number of these smaller-sized facilities over the past few years has created excess production capacity, and some unethical businesses have diverted this excess capacity to the production of high-quality pirate product.

While the manufacture of authentic-looking CDs has exploded due to the proliferation of smaller-sized copying plants, CD-R (blank CD) burning operations experienced a consolidation in 2004. CD-R reproduction in the eastern half of the United States is now dominated by organized criminal syndicates intent on monopolizing the illicit market share by operating on high volume and very low profit margins. As a result, the price of pirated CD-Rs on both the wholesale and retail level has dramatically declined.

While high volume is required to generate profit in the illicit blank CD trade, sustained enforcement and prosecution by local police agencies have forced illegal music sellers to alter current habits and keep less product on hand at any given time. For this reason, law enforcement and RIAA investigators are now more likely to seize raw materials than finished music product. In 2004, the number of counterfeit CD-Rs seized declined 27 percent, while the seizure of counterfeit labels rose 372 percent and seizures of CD-R burner equipment nearly doubled compared to 2003 levels.

"Prosecutors and policymakers at all levels of government increasingly recognize that piracy operations not only undermine the continued investment in new music but affect the quality of life of communities and deprive state and local governments of tax revenues," Buckles said.

Because Latin music continues to be among the most heavily pirated genres, it remains the focus of a major portion of RIAA anti-piracy efforts. For example, the RIAA has bolstered its Latin music anti-piracy operation, fielding a presence in at least 80 of the top 100 Latin music markets. The heightened focus has paid off, with Latin music comprising nearly half of all illicit music product seized in 2004.

"The RIAA's continued focus on the disproportionate level of piracy affecting the Latin music genre will continue to help to foster a better business environment and allow for future growth in the Latin music market," said Rafael Fernandez, Jr., vice president, Latin Music for the RIAA. "There is no question that our efforts have made a real impact–an impact that will translate into real benefits for current and future Latin artists and their fans. We nonetheless know there is tremendous work left to be done."

Law enforcement sweeps have also forced the sale of illicit product off the street–where police efforts scored real progress–and into indoor retail locations. Because of the high quality and seeming authenticity of counterfeit CDs, this genre of illicit product is increasingly finding its way to legal music retail outlets, often at prices that approach or equal the retail price of legitimate product. With inferior quality artwork and packaging, illicit CD-Rs are more often sold at retail locations such as convenience stores, liquor stores or corner markets.

Because of this shift in strategies, the RIAA reported a 21 percent decrease in the plain-view seizures that are typical of street-vendor enforcement, while the number of search warrants and consent searches continued to climb. Street vendor arrests have also declined, as law enforcement is increasingly making more targeted arrests at the distributor and manufacturer level.

Examples of significant anti-piracy operations in 2004: