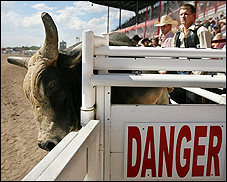 CHEYENNE (CelebrityAccess MediaWire) — In the wake of concert pullouts by Matchbox 20 and Carrie Underwood, the promoter organizing the rodeo Cheyenne Frontier Days has filed suit against an animal rights organization that lobbied for the performers to withdraw, claiming interference of business.

"As long as CFD is going to include egregious animal abuse, it will have to find entertainers who simply donâ€™t give a damn about compassion." said Hindi during a press statement in which he announced the pullouts.

Now, according to Wyoming News, Romeo Entertainment Group, the group behind the event, has taken the activist group to court, alleging that they used "false and misleading information" and "threats of negative publicity" to dissuade performers from doing gigs at the rodeo and described their tactics as "outrageous."

Shark has responded with a web posting, stating in part that "This lawsuit is a ludicrous attempt to stifle our freedom of speech, as the rodeo industry knows that the truth can only hurt them."

"We believe the right to own and use animals carries an obligation to provide proper care for all animals included in our celebration," read a statement on the CFD homepage, "While care, custody and control of all animals at Cheyenne Frontier Days lies with the owner, Cheyenne Frontier Days does not tolerate, condone, or permit actions that abuse animals." – CelebrityAccess Staff Writers