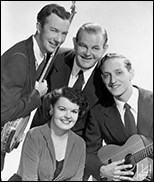 MILL VALLEY, CA (CelebrityAccess) — Folk singer Ronnie Gilbert, one of the founding member of the seminal folk quartet The Weavers died on Saturday at a retirement community near San Francisco. She was 88.

According to the Associated Press, her longtime partner, Donna Korones said that Gilbert died of natural causes.

The Weavers, formed in 1948 Ronnie Gilbert, Lee Hays, Fred Hellerman, and Pete Seeger, helped to launch the folk revival of the 1950s and 60s that provided a space for artists such as The Kingston Trio, Peter Paul & Mary, Simon & Garfunkel and Bob Dylan.

The group recorded traditional tunes with a string band format and had hits on Decca that included "Goodnight, Irene", "Tzena, Tzena, Tzena"," The Wreck of the John B", and "Rock Island Line."

The group disbanded in 1952 after members Pete Seeger and Lee Hays were blacklisted during the McCarthy era but later reformed in 1955 and continued to perform in various configurations until disbanding in 1980.

Following the group's dissolution, Gilbert went on to a solo career and continued to tour well into her 80s. She also continued her political activism, involved with causes such as protesting the occupation of Palestine.

In 2006, the Weavers received a Lifetime Achievement Award at the Grammys, with Gilbert and Hellerman accepting the award on behalf of the group. – Staff Writers