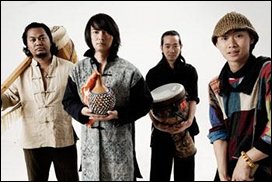 KUNMING, China (Hypebot) — Formed in China's Yunnan province, Shanren fuses Chinese folk music from multiple ethnic groups with contemporary western forms. They toured Korea and appeared at midem in Cannes. Now they're planning a trip to the U.S. in March and they're using RocketHub to supplement their funding.

Their RocketHub project, Shanren Tour: Shangri-La to North America, is off to a slow start with 44 days to go:

"In March, Shanren embark on their first North American tour…Along with bringing their infectious live shows to the east coast of the US and to Toronto for Canadian Music Week, Shanren are offering unique opportunities for fans to experience southwestern China’s culture and music through Fuel options such as private music lessons and handmade instruments."

Shanren, meaning "mountain men", describe themselves as a:

"group of four musicians with members representing the Wa and Buyi ethnic minorities. Employing instruments like the xiangzi and qinqin (four-stringed plucked instruments) and xianggu (a type of drum), they play both original compositions and reworkings of traditional folk songs, adding touches of rock, reggae, and ska… the result is a global dance party along the lines of Gogol Bordello, Manu Chao, or their countrymen Hanggai."

In addition to legitimate appearances, Shanren got some notoriety for a drinking song featuring them drinking with local people. However, they don't seem out of line accepting drinks from older women in ethnic outfits. Such encounters come with the territory when representing local music traditions.