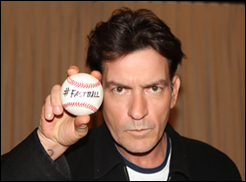 LOS ANGELES (CelebrityAccess MediaWire) — Charlie Sheen's "My Violent Torpedo of Truth" tour may, shockingly, not be the hot ticket that it was initially cracked up to be.

According to a report in CNBC, despite the initial reports of the first two dates for the tour selling out in record time, numerous seats are available. A quick search of Ticketmaster's website produced tickets to the April 2nd tour opener in Detroit still being offered, although it may be the result of the release of block of holds. Tickets to the April 3rd show appear to be sold out.

Moreover, it appears as if many of the tickets that did sell were purchased by speculators hoping to turn a profit by reselling the tickets on sites such as StubHub or Tickets. At present, StubHub lists more than 1,000 tickets on offer for the Detroit April 2 show, or roughly 20% of the theatre's full capacity. And if folks were hoping to turn a profit with these tickets, it doesn't appear to be a fruitful plan as prices have dropped as low as $17 for tickets with a face value that starts at $45.

The same story appears to hold true for the April 3rd show at the 3,600 capacity Chicago Theatre. StubHub lists more than 900 tickets available for prices starting at $39.

While the nature of the Sheen's planned performance is not entirely clear, the tour is being billed as an 18+, mature audiences sort of affair and based on Sheen's recent public appearances one might reasonably conclude that there may be references to both sex and drugs. – CelebrityAccess Staff Writers