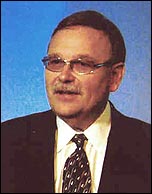 The League is the national trade
association for all facets of the Broadway industry; the annual awards
recognize excellence in touring Broadway by honoring those who significantly
contribute to its success.
The award was presented by Albert Nocciolino, president of NAC Enterprises,
Ltd., a colleague of Singleton’s, at a ceremony held at the Westin Hotel
attended by hundreds of theatre industry professionals from all parts of the
United States.

“Lynn
Singleton is a great champion of Broadway theatre," said Jed W. Bernstein, president of the League. "His work with PFM and
PPAC has put Providence, Rhode Island, and Ft. Myers and Coral Springs,
Florida on the map as important stops for any national Broadway tour. His
accomplishments over the last 21 years serve as a model to others in the
field and we are delighted to honor him this year as our outstanding
presenter of 2004.”

“It is quite
fitting and appropriate for Lynn Singleton to be selected as a recipient by
The League for Outstanding Achievement in Presenter Management," said J. Joseph Kruse, PFM board chairman. "Lynn’s
leadership from the inception of PFM to the present has been the driving
force in achieving a sound fiscal company that is progressive, and one that
has produced exceptional results, on a continuing basis, for its many
clients. PFM is indeed pleased that Lynn’s many talents are being
recognized; as a professional and a person, he has distinguished himself and
PFM.”

PPAC Board Chairman Joseph W. Walsh, Esq., who was also
honored at the ceremony as a “Star of Touring Broadway,” said, “The entire
PPAC Board of Trustees is extremely proud of Lynn for his many
accomplishments; he has positioned PPAC as one of the most respected and
renowned venues in the country.”

“I am very honored to
receive this award from The League on behalf of PFM/PPAC," said Singleton. "This recognition
must be shared by the outstanding and proactive boards of PFM and PPAC,
respective management teams, donors, sponsors and patrons at all of our
venues.”

PFM was founded in 1989 by Singleton and a core group of PPAC
management staff and board members. PFM offers management expertise in all
areas of facility management and theatrical presentation in addition to a
myriad of consulting services. Facilities currently under contract with PFM
are the Barbara B. Mann Performing Arts Hall in Fort Myers, FL, the Coral
Springs Center for the Arts in Coral Springs, FL, the North Shore Center for
the Performing Arts in Skokie, IL, and the Vilar Center for the Performing
Arts in Beaver Creek, CO. The most recent addition to the PFM roster is the
partnership with the new Palace Theatre in Waterbury, CT, which will present
its premiere season this fall.

Along with serving as president of both PFM
and PPAC, Singleton was the associate producer for Spider-Man Live! and the
Tony-nominated Peter pan starring Cathy Rigby. In 2001, he received an
honorary Doctor of Business Administration degree from Rhode Island College.
His community service includes chairing the Providence Film Commission and
serving as a member of the board of directors of the Providence Convention
Center. –Bob Grossweiner and Jane Cohen