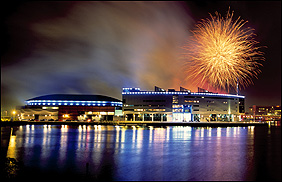 BELFAST (CelebrityAccess MediaWire) — SMG has signed a long-term deal to renew their management contract at the Odyssey Arena. A component of the agreement will see a £5m investment by SMG and the Odyssey Trust in the upgrading of existing facilities within the Arena.

The new agreement marks the tenth anniversary of the Arena's 2000 opening.

"In the first ten years of its existence, SMG has made the Odyssey Arena one of the best run and most successful arenas in the world. What we’ve achieved together in this new contract will keep the Odyssey Arena in its premier position and even build further on that success. This is a great result for both parties and puts one of Northern Ireland’s most important public assets on a very firm footing for the future – without any public subsidy or funding." said Odyssey Trust Chief Executive Robert Fitzpatrick.

"Of the many venues around the world we either own or manage, the Odyssey is special. We’ve been honoured to be part of its success in those first 10 years and now we’ve secured a new deal to build on that success. SMG continues to grow its portfolio of arenas and our ability to host the world’s top acts and events through our international network of venues means that Belfast will continue to attract some of the most popular shows anywhere in the world." added John Sutherland, SMG's European Managing Director. – CelebrityAccess Staff Writers