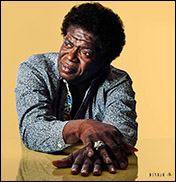 NEW YORK (CelebrityAccess) — Charles Bradley, a singer known as the "Screaming Eagle of Soul," has died after a battle with cancer. He was 68.

News of Bradley's passing comes just weeks after he announced the cancellation of his remaining tour dates due to health issues.

A native of Florida, Bradley came late to his career as a professional musician performing in his own right, releasing his first solo album via Daptone Records in 2011 at the age of 62.

In the 1990s, Bradley performed as “Black Velvet” a James Brown tribute act, which helped him to draw the attention of Daptone Records founder Gabriel Roth and the label began releasing singles by Bradley starting in 2002.

Bradley would go on to release three albums through Daptone, including his final release, "Changes" in 2016.

In 2016, he was diagnosed with stomach cancer and underwent treatment, however the cancer returned and spread to his liver.

"Bradley passed away in Brooklyn on September 23, 2017, surrounded by family and friends including members of the bands he worked closely with: Menahan Street Band, His Extraordinaires, Budos Band and the Jimmy Hill Allstarz–his band from his time performing as Black Velvet."

“Thank you for your prayers during this difficult time. Mr. Bradley was truly grateful for all the love he’s received from his fans and we hope his message of love is remembered and carried on.”

In lieu of flowers, donations may be made to the following organizations: