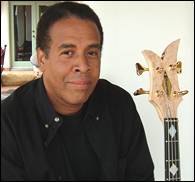 “When you are starting a record company, diversity plays a major role.  All of Roxboro’s artists come from different locations in the world offering remarkable cultural differences.  I could not be more satisfied in introducing the label via the works of Kennard, Lloyd, Ruslan and Sunnie,” said Clarke.

Multiple releases for 2012 are in the works, with Clarke acting as executive producer on these forthcoming titles. The Roxboro Entertainment Group is distributed by Universal Music Group.

The first release from Roxboro is Somos by Kennard Ramsey, a Los Angeles based composer/musician. His compositions are distinguished by the use of live orchestra, synthesizer and other digital audio media, integrating contemporary music genres with traditional.

Ramsey has also arranged music and performed with stars like Barry White, as well as jazz pioneer Ronnie Laws, and is a recipient of consecutive Aspen Music Fellowship Awards and was a finalist in the Frank Sinatra awards.

The second title from Roxboro is Lloyd Gregory’s Gentile Warrior.  San Francisco-based Gregory plays both acoustic and electric guitar, and his music reflects his R&B roots.

The title marks the fifth in a serious of albums, and includes standouts “Brazilian Sea”; and “Moment in Time”. Gregory shares, “As we grow in time, age, experience, knowledge and wisdom, there comes a time when it’s time to put it all to music and share it with the world. For this album, it was time to make music for my friends.”  Clarke continues, “He is just a sweet warm guy, and his presence comes out in his performances. His music reminds me of a modern-day Wes Montgomery.”

Paxson has toured Clarke, and has recorded and/or shared the stage with many including Justo Almario, Larry Carlton, Danny Gotlieb and Michael Paulo. A native of Philadelphia, she was a child piano prodigy whose skills were honed by studies with world-renowned French jazz pianist Bernard Peiffer, the Philadelphia College of Performing Arts and Berklee College of Music. She was voted one of “Los Angeles’ Best Jazz Performers” in Los Angeles Magazine.

Lastly is the "young gun" for the Roxboro Entertainment Group,   Ruslan Sirota, with his debut album simply titled Ruslan. Sirota rose from a humble upbringing in the Ukraine and was exposed early in his youth to American Jazz and improvisation.

At the age of ten, Sirota's family moved to Israel, where he continued his music studies. At 17, he crossed the globe via a prized scholarship to the Berklee School of Music, with personal assistance from vibraphonist Gary Burton. After graduating in 2003, Sirota jumped right in and played on and wrote material for Stanley Clarke’s The Toys of Men. Sirota also toured the world with Dennis Chambers, Marcus Miller, Seal and Brian McKnight.