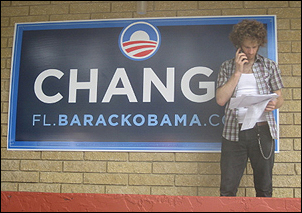 SHERMAN OAKS, CA (CelebrityAccess MediaWire) — Currently in the midst of their fall headlining “Take The Country Back” Tour, Boston rock trio State Radio performed five shows in the pivotal swing state of Florida last week. While there, the musically inventive, socially and politically charged trio made time for a visit to the Barack Obama Florida campaign headquarters in Gainesville to volunteer their time during this crucial pre-election period.

For the “Take The Country Back” Tour, State Radio–rounded out by bassist Chuck Fay and drummer Mike “Mad Dog” Najarian–created the State Radio Action website (http://stateradioaction.com/) which contains daily updates from the band’s 24-city U.S. trek. State Radio would like to be part of a future in which people come first, and “Take The Country Back” Tour is bringing attention to the 60th Anniversary of the Universal Declaration of Human Rights and the people who’ve been victims of the government cutbacks. The tour is spreading the message of respect, fairness, justice, and equality and recognizing the value and dignity of all people. In this key fall U.S. presidential election, State Radio feel it is paramount the U.S. Government is held to a higher standard and be accountable to the Universal Declaration of Human Rights.

State Radio have also announced a series of local events in cities along the Take The Country Back Tour. The group is aligning with Amnesty International to protest the pending execution of Troy Davis. The group is calling on fans, anti-death penalty activists and other lovers of justice to come out to show their support for the cause tomorrow, Tuesday, October 14 from 12:00pm to 1:00pm at the Georgia State Capitol Lawn (214 State Capitol, Atlanta, GA) where the band will perform an acoustic set. SR frontman Chad Stokes Urmston wrote a new song about the case titled “The State Of Georgia” which he is performing on tour; it will also be recorded for the band’s next album.

Joining State Radio as support on the trek is Bongo Love who hail from Harare, Zimbabwe. Bongo Love’s afro-beat music and positive stance in the face of immense hardship represents the people of Zimbabwe who experience human rights violations on a daily basis. In a special show on November 29 at Terminal 5 in New York City, renowned punk rockers Anti Flag will join the bill.