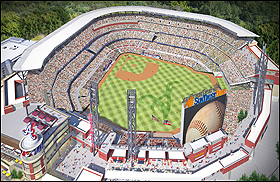 ATLANTA (CelebrityAccess) — The Atlanta Braves have announced a new naming rights partnership with Georgia's largest bank over the new stadium that will serve as the Braves' new home.

The 50,000-seat stadium, which is scheduled to open in 2017, will be known as SunTrust Park for the next 25 years. The financial terms of the sponsorship arrangement were not disclosed.

The agreement includes marquee signage for SunTrust as well as additional signage and throughout the ballpark and adjacent mixed-use complex.

SunTrust Park is being developed by the Braves organization in partnership with the Cobb-Marietta Coliseum and Exhibit Hall Authority. Construction is scheduled to start later this year is intended to be completed in time for opening day in 2017.

"This is a once-in-a-generation opportunity to partner with a great organization that shares our values for winning and serving the community," said SunTrust Chairman and CEO William H. Rogers, Jr. "This partnership provides SunTrust increased visibility on a regional and national level through a truly unique mixed-use development that will attract fans and visitors throughout the year. Importantly, it will help us reach more people as we fulfill our bank's purpose of lighting the way to financial well-being."

The SunTrust Foundation also announced that they are donating $100,000 to Hank Aaron Chasing the Dream Foundation, which provides financial assistance in the form of scholarships to young people. – Staff Writers