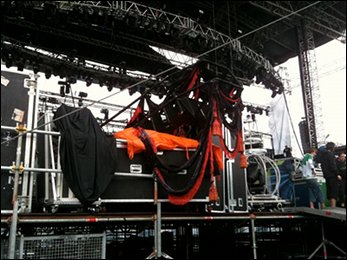 PORI, Finland (CelebrityAccess MediaWire) — Rockers Motley Crue were forced to cancel a concert at Finland's Sonisphere music festival on Sunday when a severe thunderstorm damaged the band's equipment and injured dozens of fans.

An estimated 30,000 people attended the two-day event in southwestern Finland, where acts including Iron Maiden, Alice Cooper, Motley Crue and Iggy Pop were scheduled to play.

But the music came to a premature halt when heavy storms rolled in, leaving 40 revelers injured and damaging sound equipment and the main stage, according to the press release.

Iggy Pop opted to play an acoustic set instead of using electric guitars, while Alice Cooper borrowed equipment from Slayer.

Meanwhile, headliners Iron Maiden bravely took to the stage for the festival's closing set on Sunday evening despite the freak storms.

A statement from organizers reads, "A severe thunderstorm hit (the) Sonisphere Festival in Pori, Finland this afternoon at approximately 4pm."

"Strong freak wind gusts damaged the stages and knocked down tents and fences. Approximately 40 people were injured, two of them seriously," according to the press release.

The following is an account of Alice Cooper's Tour Manager Toby Mamis on what it was like on the ground:

We all survived Sonisphere Finland.  An amazing experience for all of us who were there — bands, crews, and fans alike.

At around 3:45 PM, during the set change on the main stage after Slayer and before Alice, with Alice's crew setting up the gear, and Maiden's crew beginning to set up THEIR gear behind Alice, a tornado-like "weather event" hit the festival site, with the two stages right in the bullseye.

At the second stage, Iggy & The Stooges were about to go on, and Motley's crew were setting up their gear to follow the Stooges.

Both stages got hit hard, with the second stage rendered useless when part of the ground support (which holds up the lighting, sound and roof) collapsed.   On the main stage, the huge Sonisphere backdrop was ripped off the back of the stage, and crashed down onto Alice's equipment truck.

Thankfully, nobody on either stage was seriously injured, though there were a lot of cuts, scrapes, abrasions, headaches, and frayed nerves.

What had been a warm sunny but muggy day turned ugly within minutes, as the storm rolled in with high winds, dark clouds, and violently intense rain and, suddenly, hail, as the wind swirled, the trees swayed, and it became dark as night.

Everyone was yelling to get off the stages NOW, forget trying to save the gear, run for safety.

Within minutes, the skies cleared and everyone raced back onto the stages to make sure everyone was OK, and to begin checking gear.  Luckily, no band members or crew were seriously hurt, some crew suffering scrapes, cuts, bruises, abrasions and a lot of frayed nerves.

Unfortunately as many as forty of the fans at the festival were injured during the storm, a few of them seriously, and everyone is hoping that they recover.

The second stage was declared closed and unsafe, which meant that the Stooges and Motley's performances had to be cancelled.  Alice's and Maiden's crews were working feverishly to see what, if anything, still worked, and what they could possibly do, because the Main Stage seemed mostly OK, though soaking wet and without a backdrop.

While they, and the local stage crew, were working to dry everything out and try to put their shows back together, Slayer offered their gear, which had been loaded safely into their truck just before the storm hit, and Alice ended up using some of their band gear and their monitor rig.

Gear belonging to Alice, Maiden, Motley and the Stooges was seriously damaged, some ruined beyond repair.

Meanwhile, Iggy came over to the Main Stage and performed a short and very special "acoustic" set with just guitarist James Williamson and sax player Steve Mackay, which the crowd loved.   The rain-soaked crowd waited calmly after being informed that Alice and his band and the Maiden guys, and especially their crews, were doing everything possible, and were determined to perform.

The long wait paid off after three more hours, when Bruce Dickinson walked onto the front of the Main Stage and thanked the fans for their patience and then introduced Alice, to a huge roar, as the band launched into "School's Out" and Alice took command.

Afterwards, Alice's crew took well-deserved and hard-earned showers and had some dinner, and off we went to Helsinki to move on to the next show, with the sound and fury of Iron Maiden's show fading into the distance of the night.

The fans who waited got the show of a lifetime. One that nobody who was there will ever forget.