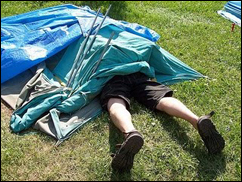 According to the Oklahoman, the tent collapsed at approximately 3pm during a magic performance at the festival. Witnesses reported that the tent appeared to billow upwards shortly before collapsing on more than 80 people.

Four adults were reportedly treated at the scene with an additional four victims being transported to hospitals in the region with non life-threatening injuries.

After the collapse, continued gusty winds at the festival site prompted organizers to shut the event down one hour early.

The tents had all been inspected by fire marshals several days prior to the collapse and had all been rented from a local supply company, the Oklahoman said.

In a statement, OCCC President Paul Sechrist expressed his regrets about the collapse and hopes that the injured would recover quickly.

"I guess I brought the house down," Jim Green, the magician who was performing at the time of the collapse was quoted as saying. – CelebrityAccess Staff Writers