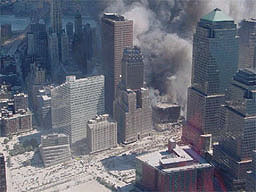 The music died today as Americans and the world remain in shock from the horrific terrorist attacks in New York and Washington, DC, as four airliners were hijacked and crashed by terrorists, causing unimaginable loss of life. Two airliners were crashed into the 110-story twin World Trade Center Towers while another crashed into the Pentagon. Out of respect for the families of the lives lost, many entertainment events have either been cancelled or postponed.

The 2nd Annual Latin Grammy Awards have been cancelled; the EMMYs have been indefinitely postponed; Sting's scheduled webcast today was nixed, and Madonna, The Black Crowes, Chaka Khan, and a number of other entertainers have either postponed or cancelled concerts.

Walt Disney World in Florida and Disneyland and Universal Studios in Southern California were also shut down.

Other shutdowns included tapings for the "Tonight Show With Jay Leno'' at the NBC studios in Burbank, "Late Night With Conan O'Brien'' in New York, which will be dark all week, NBC officials said.

The thoughts and prayers of the entire staff of CelebrityAccess go out to all of the families and friends of Tuesday's innocent victims.